RYT’s in the Good Vibe Tribe

Mr. Michael Giaimo (E-RYT 500 & YACEP) – Mike explored many avenues in life to try and gain more positive outlook, happiness, and even spiritual awareness. He gave yoga a try when training in mixed martial arts and it slowly but surely took over as his main practice, playing an enormous roll in giving him a more positive approach to life, spiritual awareness, as well as improving his health and well being. Mike wanted to pursue this as his service and share the practice with those searching for similar things. He left his previous career working under a title as a “VP in Sales/Marketing” to do that, but brings some of the useful experience he acquired in that world to Good Vibes being in charge of studio operations in addition to guiding some of the classes at the studio. In addition to Vinyasa yoga, mike has studied and taken courses on Bhakti Yoga, the Bhagavad Gita, and in 2021 Michael did 300 hour advanced training under Jason Crandell. With his original 200 training already completed in 2017, he currently holds 500 hour credentials. 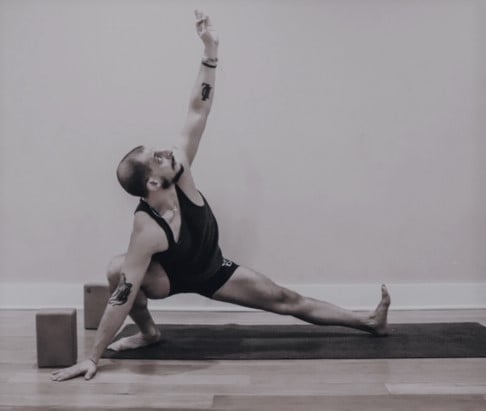 Ms. Cristin Shea (RYT 200 & Yin) – Cristin grew up dancing which may have been what drew here to yoga in her college years. Although the “play of flexibility & strength” of the physical side got her to try it, the healing side she found kept bringing her back. She has over 100 teaching hours locally and although she will be mainly guiding us in hot vinyasa she’s also able to teach Yin Yoga and of course non hot vinyasa. 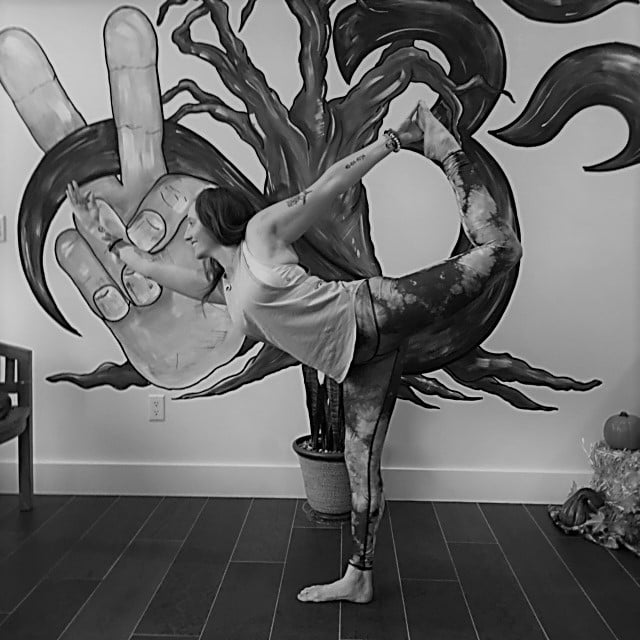 Ms. Dyana Bollander (RYT 200) – Dyana is a Nutley, NJ resident where she teaches at other schools in addition to Good Vibes Yoga. She is experienced in multiple types of Vinyasa and Restorative practices. She has a background and teaching experience in dance as well as is quite the fan of essential oils for self care and in home use. All of which sometimes plays a roll in her offering as a yoga teacher. The teaching role is very comfortable for Dyana as she is involved in it in many ways. When she’s not teaching she’s a mother of two cool boys. She has a warm & caring dynamic to her guidance but can bring the challenge when needed. 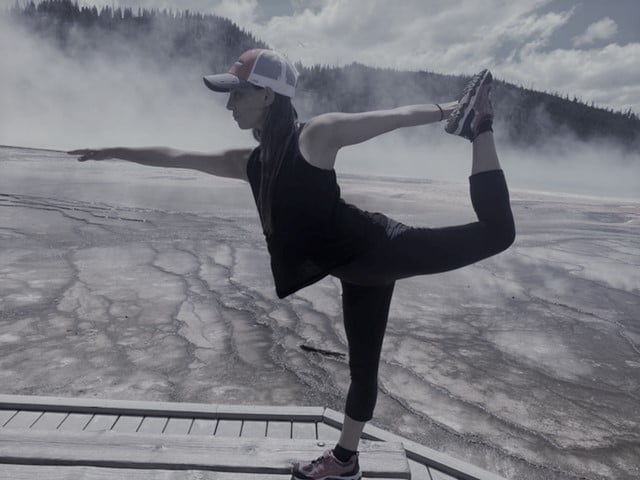 Ms. Alex Schultz (RYT 200) – Trying yoga to manage stress and anxiety of college life, Alex adopted techniques of asana sequences and breathing. She would venture to try different variances of yoga practices that all gave her lessons and methods that served her in every day life. The joy that the practice brought to her inspired her to go for her teacher certification. Alex holds many positive aspirations to serve as well as to spread the practice to as many friends as she can. Her practice is Power/Vinyasa inspired but she also has experience in guiding gentler or even beginner practices. 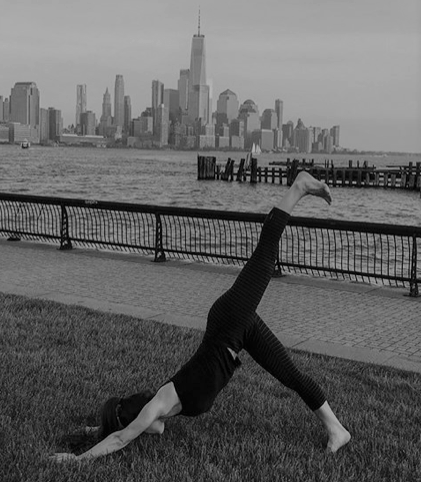 Ms. Ana Montoya (RYT 200) – Ana started practicing yoga in 2017. While it was something she overthought for a while before actually trying it, once she finally committed to beginning, she was hooked. Linking movement with breath and creating space to connect with herself brought Ana a sense of calm she’d never experienced before. She immediately realized what a difference it made in managing stress and anxiety, and how it completely benefited her overall health and well-being, both physical and mental. Since then, Ana has built a strong practice—one that has taught her just how much a little consistency can go a long way in changing one’s life. The desire to delve deeper into this catalyst is what led her to pursue her yoga teacher training here at Good Vibes Yoga. And now she’s thrilled to join this supportive community of teachers and students, where she has found the comfort and confidence to share the gift of practice with others. 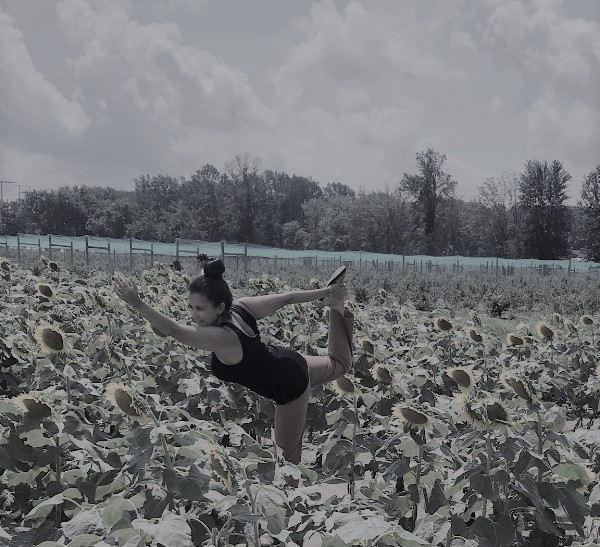 Ms. Angela Salvacion (RYT 200) – The passion for connecting and helping people look and feel good, not only on the outside but the inside too, has stemmed from her full-time career as a hair artist. Yoga practice has been a part of her routine since her early 20s and it was introduced to her at the moment she needed it the most. The way that it continually helps her to heal and grow through connecting the mind, body and soul has inspired her to show and teach that to all humans. as she says “The true joy I feel for yoga and all the learnings that come with it is felt deep down in my soul and I am looking forward to the expansion of my yoga knowledge and practice.” She gravitated towards teaching vinyasa because “I love how the combo of movement and breath can bring your entire body and mind into sync”. 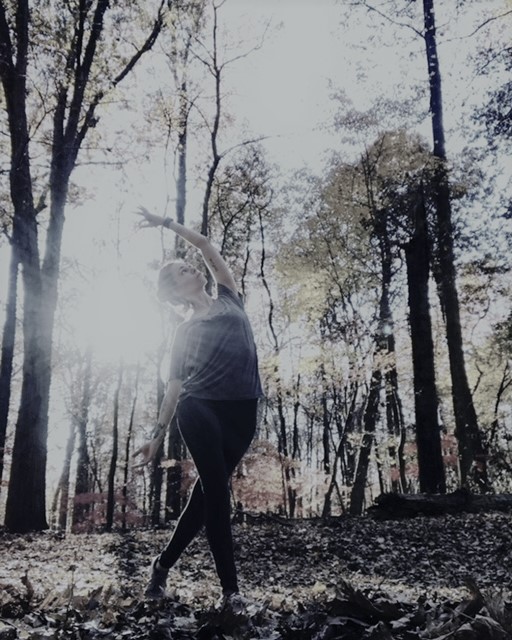 Ms. Melissa Vadasserril (RYT 200) – Melissa’s first yoga experience was hot yoga. Growing up doing ballet and having experienced countless ankle sprains and lower leg injuries, she knew she needed to change how she treated her body. So hot Vinyasa offered something challenging for her endurance that was low impact. After practicing for a while, and finding it beneficial, she started really exploring different forms of yoga and investing a lot of time and energy into her practice. She still loves hot yoga and faster paced vinyasa but has learned to listen to her body and take time to work yin and restorative as well. Gaining her 200 hour teaching credentials in 2020 she aims to offer a teaching style that is “inclusive” and applicable to many body types.

Ms. Brittany Amell (RYT 200) – Brit started practicing hot yoga in 2013 and she would do it on and off for the next few years. However, when she started working in a fast-paced and stressful sales job, she found herself taking classes 3-4 times a week at night to unwind and release all of the negativity from her day. Yoga became an escape for her. She was never able to stick to a workout routine or attend the gym regularly and she found that yoga was the only physical workout that benefitted her. She was able to work on a healthy body while also working on her mind and soul. She always dreamt of pursuing her YTT but her previous job was too time consuming. She wanted to really work on her practice and alignment while learning skills and information that she could pass on to her future students, friends and family. In the Fall of 2020, she was finally able to pursue her YTT through Good Vibes. She offers an active Vinyasa while also holding certain poses a bit longer to allow students to experience some deep stretches and relaxation. She also loves creating playlists that match the mood and tone of the class. Brit believes that the right music really enhances your experience. Her class welcomes yogis of all experience levels as everyone will gain something different from her class! 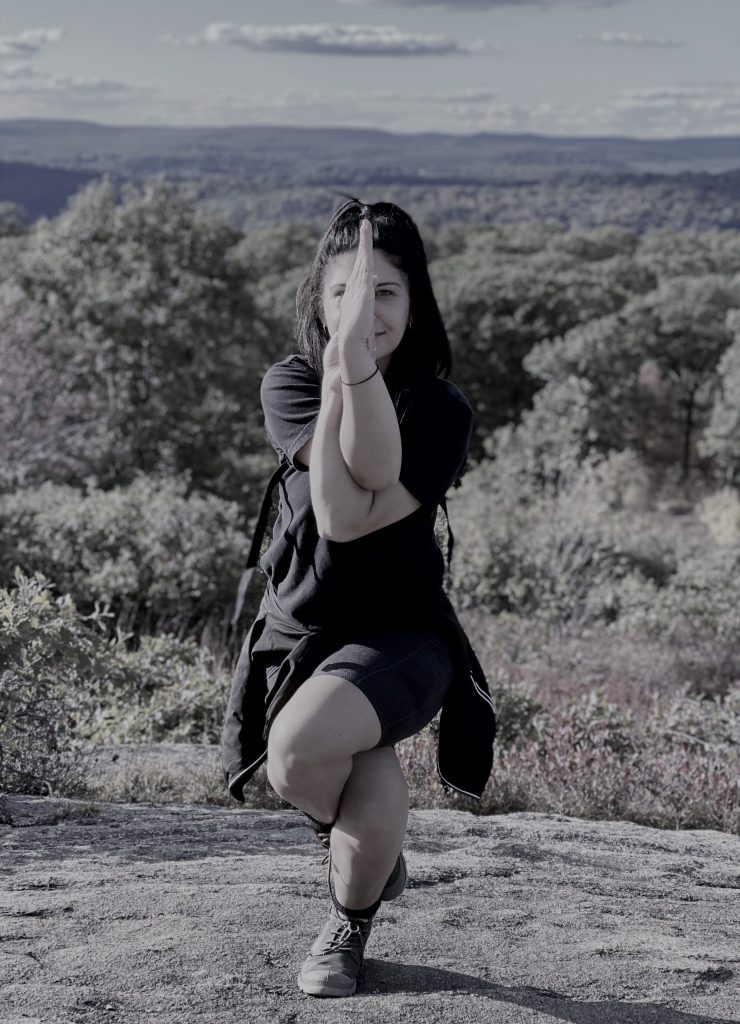 Ms. Kimie Mittman (RYT 200) – Kimie Mittman has been a familiar name to many in the New Jersey Yoga scene for several years. She has been certified as a RYT200 since 2014 and with that has accumulated enough teaching hours where it’s safe to say she fits in the category of experienced or E-RYT. In addition to her training in Vinyasa yoga, Kimie also has 95 hours training in Children’s Yoga and has managed several programs for kids and special needs individuals. Outside of Yoga, Kimie studied Early Childhood Development, Family Studies, & Special Education at West Virginia University and as of 2021, is currently completing a Masters in Psychology to become a Board Certified Behavior Analyst (BCBA) at Capella University. 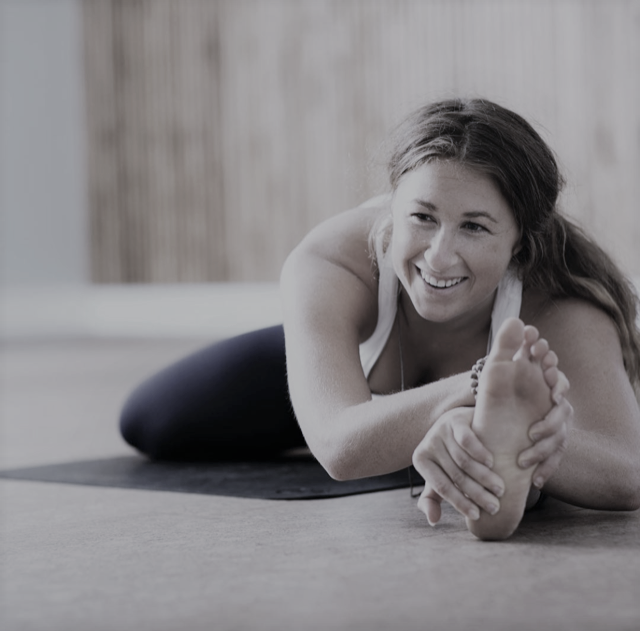 Ms. Genna Cimo (E-RYT 200 & RCYT) – Genna comes from a background in dance as well as cheer leading in her youth. She discovered yoga in high school and said it “has been her saving grace and best friend” since then. She holds the RYT 200 designation, triple certified trauma informed RCYT, and has teaching experience with first timers, children, and more active & rigorous vinyasa practices. You can expect that Genna’s classes will each have their own unique character. Her goal is to not only move you physically but spiritually.  Genna uses music as a way to lift and inspire during practice with diverse playlist that include anything from the blues, country, classic rock and more! Her passion for yoga and the way she teaches aims to have you feeling confident on your mat and in your heart. 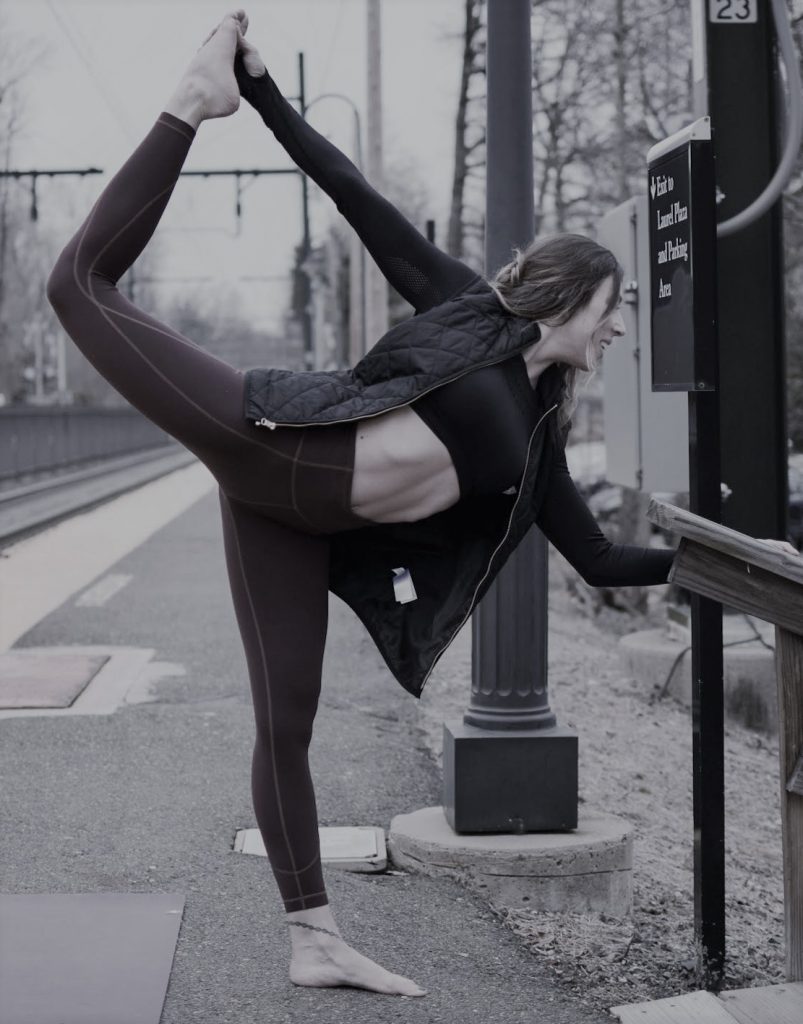 Ms. Nyreen Seguinot (RYT 200) – Nyreen is a clinical dietitian and DONA trained birth doula. As a new mom finishing her undergrad, she began practicing yoga as a form of release and learned what it felt like to really breathe. As she says, it wasn’t until she stumbled upon Good Vibes that she really learned about yoga beyond asana, over time it became another form of worship. Having a passion for her practice and general well-being prompted her to partake in YTT in the summer of 2020 at Good Vibes. She hopes to share the love and gratitude she has garnered through her yoga practice, on and off the mat with those around her. 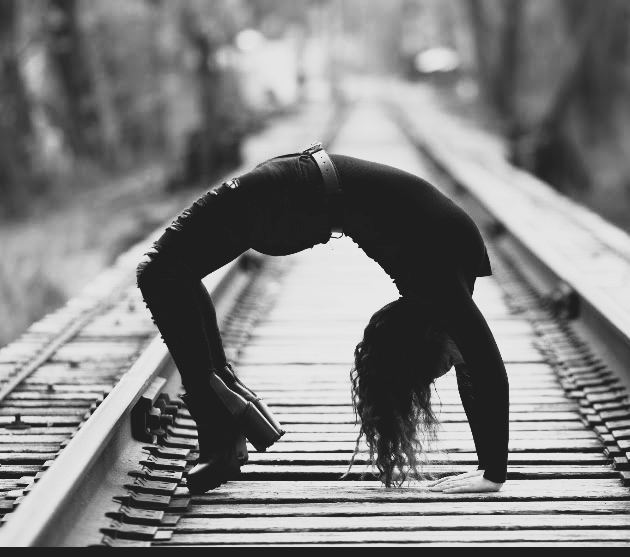 Ms. Renee Roman (RYT 200) – Renee has been practicing yoga since she was in high school. After time she felt it could be a beneficial healing modality so started participating at studios. The healing effects of yoga had always helped her but were put to the test several years later, after being rear ended in a car accident and getting a back injury, and that would get her even more involved in practicing. Eventually she pursued several movement modalities, like aerial yoga and trapeze, and would get certified to teach in that as well as receive her RYT200 certification in Hatha, Yin & Chair Yoga in 2019. Ms. Caleigh Christ (RYT 200) – At the age of four, Caleigh was gifted her very first yoga mat, which brought so much joy into her childhood. As she got older, she practiced on and off, but it was not until training at Good Vibes did she begin to dive deep and expand her knowledge beyond her individual practice. She believes that community is an important part of life, and yoga is the perfect opportunity to gather joyfully with those around you. Yoga has been a positive influence on her physical and mental health. in 2022 she trained in the 200hour program offered by Good Vibes Yoga and received her Teaching certification. She is excited to be able to hold a space for students in her class to find strength and confidence on and off the mat. 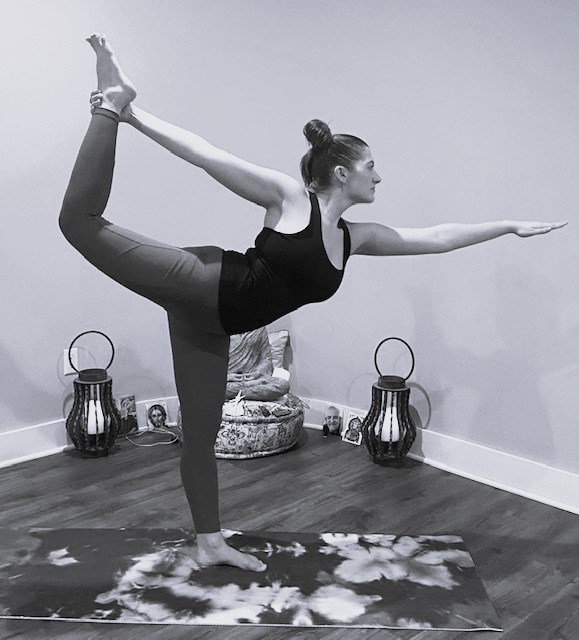 Ms. Elise Warshavsky (RYT 200) – Elise has had 20+ years of practicing yoga before doing her 200-hour training. She practiced Hatha, Vinyasa, & modern Kundalini styles although has gravitated more towards Restorative yoga and Yoga Nidra practices. Elise also has learned and practiced Thai Yoga Massage, before going to massage school here in NJ. As of 2022 Elise completed here 200hour training to be accredited as a RYT200 here at Good Vibes Yoga! 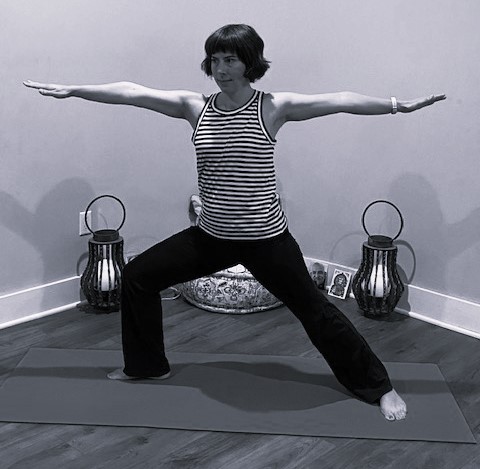